Hotels in Maha Sarakham with a swimming pool 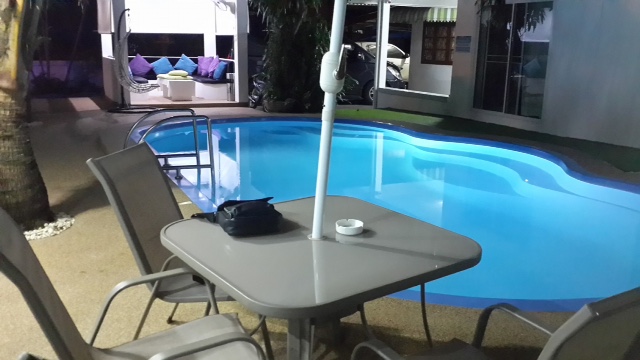 At Coconut Palms we have many guests that return year after year and some regulars come several times a year. They tell us our rates are far too cheap compared to all the other hotels in the area that charge 500 – 600 baht per night and do not have a pool. They say it’s definitely worth paying a little bit extra for the privacy and a room overlooking a beautiful pool. Unless fully booked the pool is very rarely shared with any other guests. A Coconut Palms type bungalow with a pool right outside your bedroom in Phuket or any major beach resort or city will cost you much more. The average is 3500 – 5000 Baht per night, so being able to stay for less than 1000 Baht is seriously cheap.

Our new policy at Coconut Palms. We do not allow Thai teenagers book any rooms if they want to have pool drinking parties. We tried this in the past and to be perfectly honest, they are a total nightmare. Other guests could not sleep because of the noise. They continually jump in the water, break all the inflatable pool toys are very loud. The playing and shouting in and around the pool goes on till well past midnight. Thai teenagers for some strange reason, act like “little children” that have never seen a swimming pool before. They drink beer and whisky and cannot hold their drink so get very drunk and are totally uncontrollable. The guys are the worst as the girls are quite well behaved and normal.

We and our “normal” guests, who prefer some peace and quiet, don’t need or want guests like that. We DO NOT RENT THEM OUR ROOMS and send them to one of the other hotels in the area.

Whats the area and facilities like around Coconut Palms?

We do provide a Free continental breakfast (or a cooked English Breakfast for 150 B per person).

Beer and wine is available at several shops within a few minutes walk or the 7 Eleven just up the road from us.
There are also a few Thai style restaurants in the area, a food market and many other stores, banks, post office etc.

A cheap hotel with a swimming pool in Maha Sarakham

Finding a “nice”cheap hotel with a swimming pool in Maha Sarakham is not easy to say the least.

hotels with pools in Mahasarakham

There are a couple of other hotels with pools which we will outline here.

The Orchid resort and Relax is near the Maha Sarakham University student campus area.

The Orchid resort and relax also has a swimming pool. The decor in the rooms are a bit strange and it looks like the place was set up initially as a “24 hr Love hotel”. The rooms look OK and they have various styles with round bamboo style huts and basic rooms. The access road is the biggest issue that several guests that have stayed there have told us about. It seems it’s not a road but a small muddy track between a pond and a farm that is the biggest problem with the location. Then there are the pool and drinking parties that they do allow, another thing some guests have complained about. 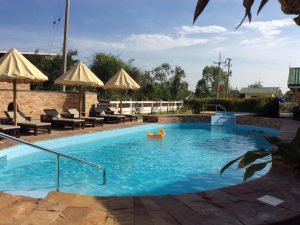 The Taksila hotel is one of the oldest hotels in the area and is also has a swimming pool and convention centre. The hotel is OK if you like large dated hotels but the pool is more like a public swimming pool and quite big. Therefore it has no shade and can get very hot in the midday sun. I have also been told it closes fairly early in the evening due to staff issues and safety. 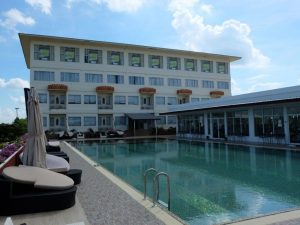 There are loads of these Thai style hotels with basic to some very nice rooms and if you are lucky you may even get a room with window! These rooms are fine for travellers that just need a bed for the night but anyone planning to stay a few days to a week or more, do not want to be stuck in a tiny room. Most people want to have a swim or lounge by the pool and eat outside in nice gardens and surroundings. Some of the cheap hotels (without pools) and reviews can be found here